The indented coast of Southern Brittany once supported substantial fleets of wooden boats. They mostly fished for tuna, herring, lobster, sardine and shellfish. They also transported goods of all kinds.

The boats ranged in length between six and sixty meters. As these replicas show, their hulls’ robust practicality and graceful curves demonstrate how classical form follows function.

Technical advances and a decimated population after both world wars made wooden fishing boats less and less viable.  There were too few men to crew them. They were displaced by steel hulls, better engines, smaller crews and refrigeration.

Many of traditional wooden boats were abandoned on a quiet tidal backwater at Lanester, on the Blavet River upstream from Lorient.

Today this decaying, stationary fleet numbers around 60 craft including many more modern boats.

There are numerous ‘bateau cimetières’ (boat cemeteries) along the Breton coast.

Working amongst these graceful hulls at low tide, I sketch and take photographs for colour notes.  Then I paint them in oils in the studio.

Several of these paintings hang in the atelier of Voilagil in Questembert where the very talented Lucie Albugues makes sails for traditional boats. 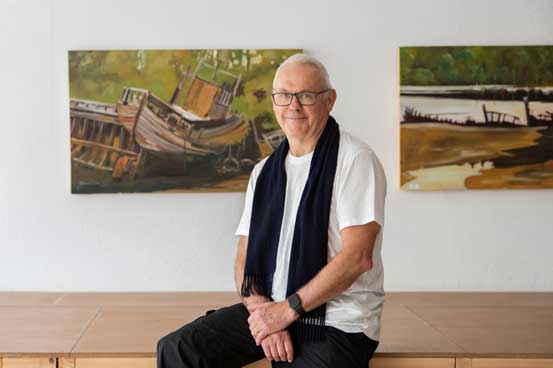 To visit me in my studio or Lucy at Voilagil. Get in touch